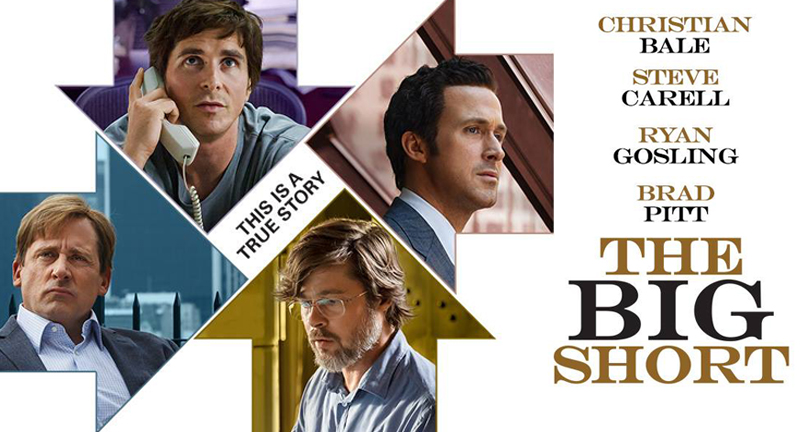 Just saw the movie, the Big Short. This movie was EXCELLENT! Highly recommend it if you are a “truth seeker” like me, and it doesn’t scare you to know how or why things are the way they are in the world.

I hope everyone sees this movie. I think everyone in America needs to see how GREED has affected our country and our people. You don’t realize how corrupt America is until you see the big bank bailout and home foreclosure acted out by Brad Pitt and Ryan Gosling. Maybe now people will listen and see some serious corruption in the economic sphere.

Go see it or wait for it to rent, but it may make you angry…and sad. At the end of the movie you realize that the rich got away with things and stayed rich, while the middle class people had to pay dearly for the rich’s lack of responsibility and greediness. I went home with a stomachache and a prayer for us as a country.

While people are screaming about how “violent” Islam is, let me remind people that the major idea the Quran pushes is equality of wealth distribution. Every “spoil of war” that Muhammad had won was told to be shared with the poor, orphans, and needy. There is no getting away from that. Islam, regardless what you interpret the violent verses to mean, there is MAJOR obligation to give charity and not hoard wealth. Also there is absolutely to be no interest added onto a debt. No usury of any kind.

And if someone is in hardship, then [let there be] postponement until [a time of] ease. But if you give [from your right as] charity, then it is better for you, if you only knew.

So in a society that would follow the tenants of the Quran, these tragic situations of the banks would not happen and people would never lose their jobs, or homes. In 2007, the economic bubble burst and it left 5 million jobless all because banks and loan companies got greedy. I am not an economic major so I can’t explain exactly what happens. Just know there are A LOT of people in life to just make money and you see this through the movie which is a true story. They have sold their souls for a quick million.

Moses also received these same revelations, but it got altered over time and so the 7 years off and on of debt rule came about.

Or do you ask of them a payment, so they are by debt burdened down?

But the Quran actually teaches that you can NEVER keep someone in debt through interest. Think about it: the people who come for the loans in the first place need it financially, and if you tack on more money to owe on the end, then you place them further in debt. Trapping them completely making them your slaves. We are in debt to the Central Banks today as Americans.

Woodrow Wilson signed an agreement with the Central Bankers that put us in great debt in 1919 after WW1. Biggest regret ever.

While Americans are shown youtube videos of ISIS chopping off heads or threatening us, they are distracted to not look further into the rules that Islam institutes. It’s all a distraction to get people to not see the truth of the matter. We have some extremely greedy people in the world and they want all the cars, homes, material possessions to themselves for the least amount of work, and they never learned how to share with others.

Can I just say right here, that if you suffered personally from the greed of these people and lost a home, job, well being in 06-07’…I am sorry. Let me remind you while you struggle on earth to make a honest living, stay a good person and don’t do things to morally corrupt who you are at the core-you will be rich spiritually and that is so much more than having lots of money. ❤

Righteousness is not that you turn your faces toward the east or the west, but [true] righteousness is [in] one who believes in Allah , the Last Day, the angels, the Book, and the prophets and gives wealth, in spite of love for it, to relatives, orphans, the needy, the traveler, those who ask [for help], and for freeing slaves; [and who] establishes prayer and gives charity; [those who] fulfill their promise when they promise; and [those who] are patient in poverty and hardship and during battle. Those are the ones who have been true, and it is those who are the righteous.