In the name of God, the Gracious, the Merciful.

1. Alif, Lam, Ra. A Scripture whose Verses were perfected, then elaborated, from One who is Wise and Informed.

2. That you shall worship none but God. “I am a warner to you from Him, and a bearer of good news.”

3. “And ask your Lord for forgiveness, and repent to Him. He will provide you with good sustenance until a stated term, and will bestow His grace on every possessor of virtue. But if you turn away, then I fear for you the punishment of a grievous Day.”

4. “To God is your return, and He is Capable of all things.”

5. They wrap their chests to hide from Him. But even as they cover themselves with their clothes, He knows what they conceal and what they reveal. He knows what lies within the hearts.

6. There is no moving creature on earth but its sustenance depends on God. And He knows where it lives and where it rests. Everything is in a Clear Book.

7. It is He who created the heavens and the earth in six days-and His Throne was upon the waters-in order to test you-which of you is best in conduct. And if you were to say, “You will be resurrected after death,” those who disbelieve would say, “This is nothing but plain witchcraft.”

8. And if We postponed their punishment until a stated time, they would say, “What holds it back?” On the Day when it reaches them, it will not be averted from them, and what they used to ridicule will besiege them.

9. If We give the human being a taste of mercy from Us, and then withdraw it from him, he becomes despairing and ungrateful.

10. And if We give him a taste of prosperity, after some adversity has afflicted him, he will say, “Troubles have gone away from me.” He becomes excited and proud.

Muhammad is introduced to this new chapter of revelations by a few words with meanings that only God and the Angels understand, Alif, Lam, Ra is considered a mystery by even the most advanced Islamic scholars. When I say these words to myself, I get a feeling of vibration between the words. In some ways these words open up some form of communication and “Ra” is another name for the ancient Egyptian sun god they used to worship. I do not get the idea that this is about Ra in the sense, but the meaning behind the word is supposed to convey some form of honor or higher degree of respect that Gabriel is showing Muhammad to have for God of all things-not the sun, but the God of the entire Universe.

As in line 2, states this is what Muhammad is to say to the people to see that worship is not supposed to be divided into sections or different deities and Muhammad is to warn them all of the punishment if they do that.

The people are to ask for forgiveness and to change their ways they used to conduct themselves by. Even when they wrap their chests or heads up to cover their bodies, God sees what is in their hearts. This is a major argument towards why the hijab or veils are not important to being a muslim, because it is beyond the veil that God can see righteousness. Some women or people who don’t wear cover may have the purest hearts…it is and never was about the clothing in true spirituality.

Muhammad is to tell the people that they will see that this life is not all there is and everyone will be resurrected once again. It is not magic. It is the way God creates and re-creates.

Gabriel is telling Muhammad the hard truth about a human trait that needs to be taught to be aware of. If God and the Angels show Mercy, then allow them to live on their own without guidance or “extra help” from above, humans show ungratefulness all of a sudden towards God. They fail to recognize all the other blessings given to them. This is because the greedy nature of the human is close to the surface always and we must strive to fight to always want “more and more” than what is given.

And then if God gives prosperity to a person after hard struggles and trials, they tend to forget God’s graces and become proud and haughty thinking it is all their own doing. God is always trying to teach humility, and the moment you think you are above other humans-you are following the prideful path of Satan that caused him to fall. 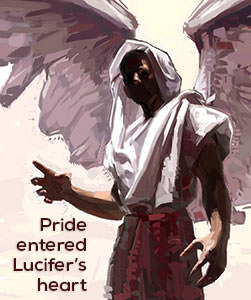